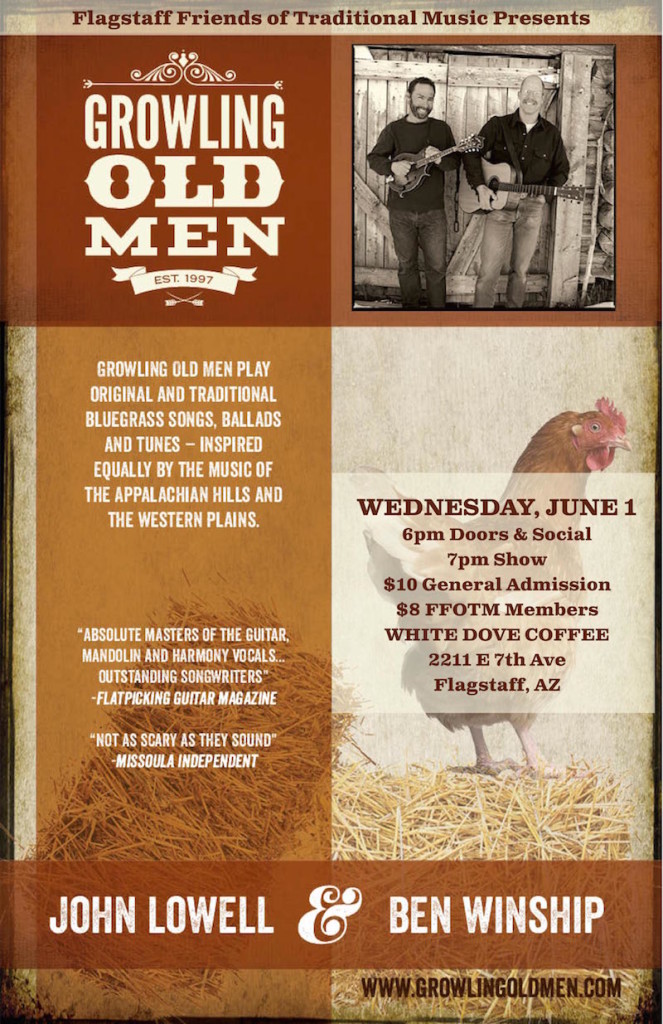 The Growling Old Men don’t consider themselves old, nor do they growl very much. What they do is play acoustic music on mandolin, guitar, octave mandolin and vocals. Playing an eclectic mix of music including bluegrass, Americana, folk, swing, and original songs, these guys have made fans of their music everywhere they go.

The Growling Old Men really enjoy playing music together. Ben Winship (mandolin & vocals) and John Lowell (guitar & vocals) are both veterans of the Northern Rockies’ acoustic music world and have been performing and recording together since 1998. Together the duo presents a tight, yet relaxed set of original and traditional bluegrass songs, ballads and tunes – informed equally by the music of the Appalachian hills and the western plains.

In concert the Growling Old Men are engaging and spontaneous as they make a big sound for two guys. Their shows include a blend of well-rehearsed material and few new songs hot off the press – they like to walk the edge of improvisational risk taking.  The duo strives to contrast simplicity with complexity; all with good tone and a warm sense of humor.

Festivals, concerts and workshops have led these minstrels both near and far – from hometown cafes to A Prairie Home Companion, from Canada to the Shetland Islands. In 1998 the self-titled Growling Old Men was released, followed by Occupational Hazards in 2005. In addition to working as a duo, they occasionally play with their favorite fishing buddy, songwriter and bassist, David Thompson. And when in the UK, they frequently collaborate with Leon Hunt (banjo) with whom they produced (More) Growling Old Men: Shuttle Diplomacy in 2008.

Their CDs are truly a joint effort with the lead singing, harmony, songwriting and picking duties shared throughout. These have earned them rave reviews from fans, djs and the press alike. Says Dan Miller, editor of Flatpicking Guitar Magazine, “The first Growling Old Men project is one of my all-time favorite recordings …. These masters of the guitar, mandolin, and harmony vocals have continued to hone their craft over the years – their vocals are tighter and they speak to each other through their instruments with a smoothness, fluidity, and familiarity that magically occurs when musicians come to know each other so well they can read each other’s mind. I could go on and on.”

Ben Winship is a multi-instrumentalist and was a founding member of Loose Ties, with whom he performed from 1986 to 1996. In the words of Tim O’Brien, “Ben is one of the acoustic music scene’s best writers.” In addition to the Growling Old Men, he also performs with Brother Mule, the Fishing Music Band and a local Dixieland band. Ben also runs a well respected recording studio, the Henhouse, and his CDs and soundtracks have appeared in numerous documentaries and everywhere from MTV, ESPN, NPR, Sirius to the World Café and Car Talk – a testament to Winship’s versatility and broad appeal. Despite countless hours driving around with windows down and running a chainsaw, Ben’s hearing is still pretty good.

John Lowell has been a stalwart of the Montana bluegrass scene for the past 25 years. Fronting two of the regions finest bluegrass bands, Wheel Hoss and Kane’s River, John has set a standard for rock solid guitar playing and great singing. “John Lowell is an engaging vocalist and a facile guitarist,” said Bluegrass Unlimited, adding that, “he is a great storyteller.” Lowell’s songs often show up on the bluegrass radio charts, having been covered by a growing list of contemporary bands: Valerie Smith, Front Range, New Vintage, Bryan Bowers, Bluegrass Etc. John has been featured on the cover of Flatpicking Guitar Magazine, he has been compared to some of the finest guitarists in the business, and to a ham sandwich.