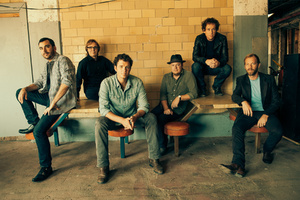 The Orpheum Theater has generously donated a limited number of discounted tickets to FFOTM members for the Steep Canyon Rangers show on Friday, February 13 at 8:00 pm.  You can purchase tickets at Flagstaff School of Music, 2213 E 7th Ave, and Arizona Music Pro, 122 E Rt 66, at the discounted price of $14 (total price including fees). This offer is available to the first 50 people who purchase tickets by Wednesday, February 11.  Thank you to The Orpheum Theater!

FFOTM memberships are $15 per individual and $25 per family per year.  Visit our membership page to find out more information about becoming a member.

“True bluegrass, when done well, is a thing of art and the Steep Canyon Rangers are the genre’s current Rembrandt.”
-Examiner.com

When the time came for the Steep Canyon Rangers to record the follow-up to 2012’s Nobody Knows You, they headed north to Woodstock, NY, to Levon Helm’s famed studio with Grammy-winning producer Larry Campbell and engineer Justin Guip. This was a departure for the band, and they gave Campbell full control over the recording rather than act as their own co-producer.

Over the months before they started to record Tell The Ones I Love, they sent him several dozen new songs to consider. And while the Steep Canyon Rangers were certainly open to recording songs by other composers, or to dip into traditional material, Campbell ultimately had them record all original tunes, based both on the strength of the songs and the band’s arrangements. This seems fitting for a band whose stellar reputation is based on performing original material, and who had just won the Best Bluegrass Album Grammy Award for Nobody Knows You. There’s a backstory here, too: last year, the band played Levon’s Midnight Ramble, and impressed Helm enough that he invited them to come back and record at the barn. Unfortunately, that didn’t happen before his untimely passing, but they still felt his joyful, creative spark and subtle influence while working in his studio.

The band wanted Tell The Ones I Love to reflect the spirit of their concerts—an original, freewheeling, high-energy approach to bluegrass that rests mainly on the songwriting of Graham Sharp and Charles Humphrey. They recorded the album almost entirely live, using few overdubs. “We wanted it to be different from our last album,” explained banjo player Graham Sharp, “and create something more raw and immediate.” Guitarist Woody Platt added that they headed into recording with “more confidence and momentum” from both their Grammy win and their unrelenting touring schedule.

Campbell, a highly sought after musician and producer (Bob Dylan, Levon Helm), was often down on the floor with the band so he could feel what was being performed. His strategy to have the music sound organic – “where you can hear the environment of the barn” – fit well with the band’s performances. Sharp praised Campbell for being “exactly what we needed in a producer. Larry took us through arrangements from a little different perspective.”

steep canyon rangersTell The Ones I Love actually is the first bluegrass album Campbell produced, although as a big bluegrass fan, he has heard, in his estimation, “20 million bluegrass bands.” When he saw the Steep Canyon Rangers play at the Ramble, Campbell was attracted to how they respected bluegrass without being constrained by its conventions. Getting into the studio with the band only enhanced Campbell’s appreciation of their collective and individual talents. He admired that they “held on to the essence of what makes bluegrass viable, and subtly reinvented it to make their thing unique.”

One way that the band stretched bluegrass boundaries was with their use of drums and percussion on Tell The Ones I Love. “We didn’t want something that was just a bluegrass track with drums laid on it like an afterthought,” said Sharp. “We wanted something that was really integrated.” They enlisted Jeff Sipe (Leftover Salmon, Susan Tedeschi, Aquarium Rescue Unit), whom Sharp described as “one of the best drummers around.” His propulsive playing helps to drive the title track as well as injecting some funky rhythms into “Camellia.”

Tell The Ones I Love showcases the Steep Canyon Rangers’ myriad talents— nimble instrumental agility, tight harmony vocals, and inventive songwriting. The 12-song set ranges from full-band workouts like the title track to the haunting, vocally tight “Hunger.” On “Las Vegas,” the band displays jazzy touches while Mike Guggino’s instrumental “Graveyard Fields” is a bluegrass tour de force. Tell The Ones I Love, in fact, affords each Ranger opportunities to shine, whether it’s Graham Sharp’s expressive banjo intro on Charles Humphrey/Jonathan Byrd’s plaintive “Bluer Words Were Never Spoken,” Nicky Sanders’ soaring fiddle on “Boomtown” or Humphrey’s walking bass that anchors his “Mendocino County Blue.” “It’s a record that doesn’t stay on the same plane,” Platt, who contributes dynamic lead vocals on nine of the songs, explained. “It has an interesting contour, like we try to develop in our live shows.”

These days, it’s hard to talk about the Steep Canyon Rangers without mentioning Steve Martin. After meeting at a party and clicking immediately, Martin invited the band to tour and record with him. 2011’s collaboration Rare Bird Alert was nominated for a Grammy, and later that year, they won IBMA’s Entertainer of the Year Award. They average about 50 dates a year together, touring as Steve Martin and the Steep Canyon Rangers, and most recently with the addition of special guest Edie Brickell. What has emerged is a real collaboration of seven consummate musicians—creating music that they are passionate about, and blending it with humor to form a sophisticated show. They are proud that it has exposed legions of new fans to the bluegrass genre. These collaborations have stretched the Steep Canyon Rangers musically, and definitely broadened their horizons and experiences, which include recent appearances on Austin City Limits, the Late Show with David Letterman, and the Today Show, and performances at Carnegie Hall, the Grand Ole Opry, MerleFest, Neil Young’s Bridge School Benefit, as well as their own Mountain Song festival and Mountain Song at Sea cruise.

The release of Tell the Ones I Love finds the Steep Canyon Rangers in a unique situation, and one they don’t take lightly: “It took a lot of work for us to nose our way into the bluegrass world and become a de facto representative,” Sharp acknowledges, “and we think it’s a real responsibility.” With this new record, “we can be a bridge between the bluegrass crowd and a wider audience that may not be die-hard bluegrass fans.” Yet.