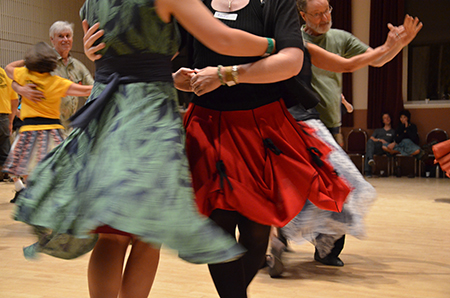 The hottest Northern Arizona Dance event of the spring.

Erik Erhardt, our guest caller, may have a Phd in statistics, but don’t let Prof. Erik Erhardt’s motto put you off, “I bring excellence to everything I do.” Erik is a fun guy who travels widely for dancing and community building. His engaging and entertaining manner is encouraging and clear, He understands the subtleties of making dancing satisfying and joyful and believes that dancing is not about fancy moves (though he may teach a few), but about connecting with your partner, the music, and the flowing community on the floor through awareness.

Larry Unger, banjo & guitar player extraordinaire, has been a full time musician since 1984, and has presented a diverse range of musical performances at contra dances, dance weekends, dance camps, festivals, and concerts all across the United States and in Canada, and Europe. He’s one of the busiest musicians around, playing for more than 150 dances every year. He has played with many top bands for contra dances including Notorious, Reckless Abandon, Uncle Gizmo, Big Table, and the Reckless Ramblers. In addition to traditional standards we’ll be dancing to some of Larry’s more than 600 original fiddle tunes and waltzes, many of which appear as standards in the repertoire of Arizona contra bands.

Playing with Larry will be a Southwestern favorite, fiddler Karina Wilson from New Mexico. The daughter of a caller, Karina began playing fiddle at age 5 and mastered classical violin and Zimbabwean marimba on her way to swing dance fiddling with a hot rhythmic style that rocks and rips at your heart strings at the same sweet time. On loan from her band Second Nature, a fixture at New Mexico English and contra dances, Karina joins Larry for a collaboration (“Contrabo”) that will set new standards for our local dance.