Running out of Road at Firecreek Coffee Company 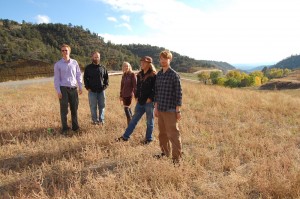 Running Out Of Road  is composed of Ian Lennox (Guitar, Lead Vocals), Michelle Fletcher (Bass, Vocals), Duane Tucker (Banjo, Vocals), Jeff Morehead (Dobro, Vocals), and Rusty Charpentier (Fiddle, Vocals). Every member of the band writes music, but Duane Tucker and Ian Lennox are the group’s most prolific songwriters. Their inspiration often comes from life in the southwest, family history, and of courseˆ …ø love and relationships.

Although Running Out of Road has only been a band for about a year, they have become a large presence in the music scene in Durango and across the Four Corners. In 2013 ROOR played in the Durango Bluegrass Meltdown, competed in the Flagstaff Band Contest, and performed at the famous Fox Theatre in Boulder. The members of ROOR also host a String Club where they coach students in the Durango area on playing bluegrass/folk music. Students from the String Club performed at the 2013 Bluegrass Meltdown, and this year more students are participating than ever before!