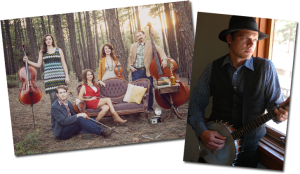 Tucson-based Run Boy Run will perform a benefit concert at Charly’s Pub in the Weatherford Hotel next Thursday, August 1, 2013. Flagstaff banjo player Jesse Anderson will open. A portion of the proceeds will benefit Pickin’ in the Pines Bluegrass & Acoustic Music Festival. The show starts at 8 pm, with doors opening at 7:30. Tickets are available at Arizona Music Pro, Charly’s Pub and online via Paypal, using the link above. Tickets are $10 for members of Flagstaff Friends of Traditional Music, and $14 for non-members.

The unique sound of Run Boy Run is rooted in the traditional music of the Appalachian South. In recent years, bands like Nickel Creek, Crooked Still, and others have revived a sense of innovation in traditional American music. Run Boy Run continues this journey into music that is dynamic, orchestral, and overflowing with beauty. Run Boy Run exists in the tension between tradition and frontier. Three strong female voices weave a spectacular tapestry of sound. Award-winning fiddle cuts a path for a tightly formed rhythmic front. Every arrangement is – at its core – beautiful. Hear their music.

From winning the band contest at Pickin’ in the Pines in the first weeks of forming in 2009 to playing on stage at the Telluride Bluegrass Festival as band contest winners in 2012 to making a second appearance on A Prairie Home Companion in St. Paul in 2013, Run Boy Run is spreading this special brand of music far and wide. With the release of their full-length album So Sang the Whippoorwill this past spring, Run Boy Run is making more people dance, cry, and sing than ever.

Brother and sister, Matt (fiddle, guitar) and Grace Rolland (cello, vocals) have fiddle music running through their blood. Raised with bow and rosin on every bedside table, Run Boy Run was a natural fit. Sisters, Bekah (fiddle, vocals, guitar) and Jen Sandoval (mandolin, vocals) grew up deeply rooted in the bluegrass festivals of Arizona, so they too found a home in Run Boy Run. Jesse Allen (bass) was brought up on opera and western swing, and grew to love the natural fusion inherent in American music. The whole truly exceeds the sum of the parts as touches of classical, jazz, and folk express themselves through the old-time core of Run Boy Run’s unique sound.

Banjo-wielding Jesse Anderson will unleash his taut interpretations of ageless old-time tunes and well-crafted originals in a torrent of Americana goodness.

Currently performing solo on the Grand Canyon railway and throughout Arizona with the old-time dance band The Privy Tippers, Jesse has the rare ability to hold an audience captive with nothing but his nimble fingers and hurricane voice. Listen and learn more about Jesse.