Flagstaff Friends of Traditional Music and Flagstaff Cultural Partners present Americana Roots Female Trio, Red Molly, in concert at the Coconino Center for the Arts. The concert will take place at 7:00pm on Wednesday, March 5, 2014. 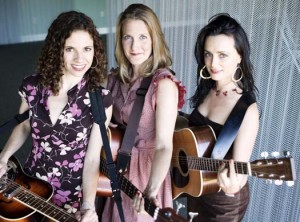 Since 2004, Americana trio Red Molly has been bringing audiences to their feet with gorgeous three-part harmonies, crisp musicianship, and their warm, engaging stage presence. The band consists of Laurie MacAllister (bass, banjo), Abbie Gardner (dobro, banjo) and Molly Venter (guitar). This past year, the ladies were invited to open multiple shows for music legend Willie Nelson and they performed at the venerable RockyGrass festival in CO. Their new CD “Light in the Sky” spent 20 weeks on the Americana Music Association’s Top 40 radio chart and charted as Folk DJ’s #3 Top Album of 2012. In 2013, the band will spend the month of March touring throughout Australia, and in August will head to Europe for the first time, for Denmark’s Tonder Festival. They have also been invited to appear for the third time at NC’s legendary music gathering, MerleFest. Also scheduled is a fourth appearance at the Bristol Rhythm and Roots Reunion, where in September 2012 the Bristol Herald Courier dubbed Red Molly “The Twin City’s sweethearts”, saying the band “lit up the stage, as a massive crowd of adoring fans sat mesmerized by their silky smooth harmonies and superb musicianship.”