The Prescott Bluegrass Festival will be celebrating its 33rd year in 2014.  The festival started as a fiddle contest dedicated to a local fiddler.  In the mid-80’s it took on the character of a typical Bluegrass festival. Admission was charged at the gate, camping was available for the weekend and concessions were set up. 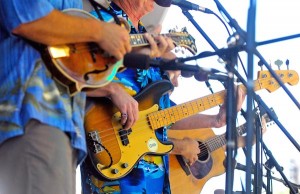 Until about the mid-90’s the event was held at Watson Lake Park in July, right at the start of the monsoon season. In 1996 the Festival was moved to the current location. The Yavapai County Courthouse Plaza and the dates were changed to the weekend following Father’s Day. Better weather was, we hoped, assured. At that time the event changed character again – to one with free admission. It remains the only FREE Bluegrass Festival of its caliber in the Western United States.  It receives financial support from our Friends of Bluegrass:  Prescott Chamber of Commerce, City of Prescott, tri-City businesses as well as many individual Bluegrass fans.

The Prescott Chamber of Commerce strives to bring our audiences a variety of Bluegrass shows- traditional and contemporary; national, regional, and local groups; family and non-family bands – while maintaining the highest standards for the music. It is our goal to continue to improve this process so that our audiences can be assured of superb quality entertainment year after year.