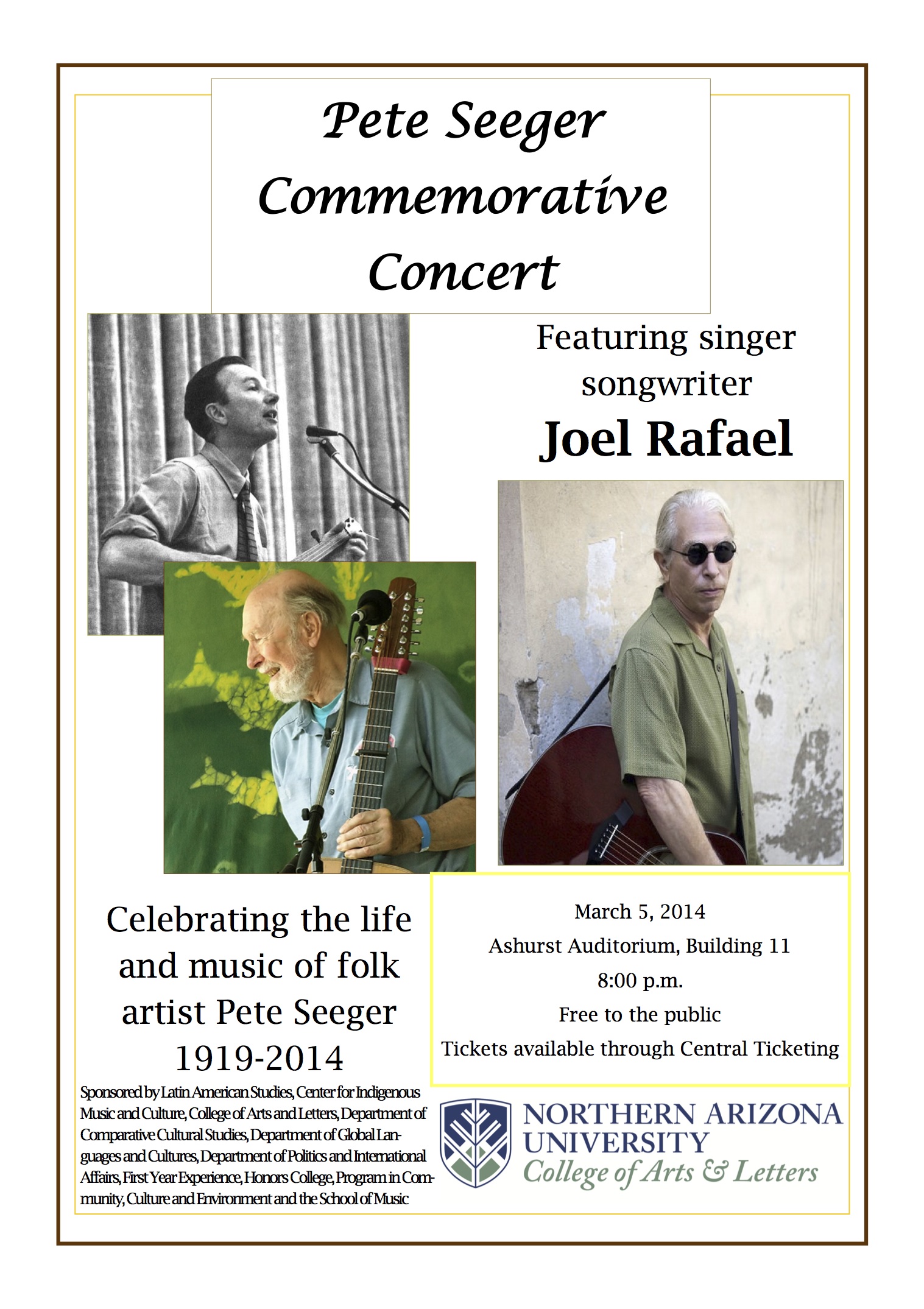 Concert is free but ticketed.  Pick up tickets at the NAU Central Ticketing Box Office in the Student Union.  General Admission Seating.  Doors open at 7:30 pm.  We will seat people in empty seats in case of no-shows.

Folk music legend Pete Seeger passed away at 94 years of age on January 27, 2014. An activist for civil rights, peace and the environment, Seeger testified in 1955 for the House Un-American Activities Committee and courageously refused to answer questions that he considered undemocratic: “I am not going to answer any questions as to my association, my philosophical or religious beliefs or my political beliefs, or how I voted in any election, or any of these private affairs.  I think these are very improper questions for any American to be asked, especially under such compulsion as this.  I would be very glad to tell you my life if you want to hear of it.”  In 1969, Seeger led 500,000 people in song at a march against the Vietnam War in Washington DC. In 2012 he donated a song to Border Songs, a Flagstaff-produced album that benefits migrants in the Arizona desert.  This concert will honor Pete Seeger’s activism and music, educating NAU students about this legendary human being whose 7-decade career may have gone unnoticed by todays’ students.

Who: Joel Rafael.  Following in the tradition of Woody Guthrie and Pete Seeger, Joel Rafael’s songwriting has chronicled the world around him for over four decades with music rooted in the folk tradition. He has opened for many national acts including Crosby, Stills and Nash, Sheryl Crow, Rick Danko, Emmy Lou Harris, Laura Nyro and John Lee Hooker.  In 2004 he toured with Joan Baez and he has played regular co-bookings with John Trudell.

Rafael recorded Pete Seeger’s “Last Train to Nuremberg” on the 2001 compilation, Songs of Pete Seeger.  In 2012, he played at a celebration of Woody Guthrie at the Kennedy Center in Washington, DC, (with Jackson Browne, Rosanne Cash, Donovan, Judy Collins, Tom Morello, John Mellencamp and Ramblin’ Jack Elliot, a concert recently released as a CD/DVD set, Woody Guthrie at 100!  Live at the Kennedy Center.  Rafael’s song “Dance Around My Atom Fire” from his album, America Come Home (2012), won the International Acoustic Music Association’s Best Folk Song of 2012.  David Crosby and Graham Nash sing harmonies on the title track.  He has been a featured performer at the Woody Guthrie Folk Festival every year since it’s inception in 1998.  He has “co-written” a number of songs with Woody Guthrie, setting Guthrie’s lyrics to his own music.

“This is an incredible opportunity for the NAU and Flagstaff communities. Joel Rafael is a master performer with a soul–a musician who receives standing ovations at the Newport Folk Festival and contributes to compilations that benefit humanitarian aid for migrants in Arizona and the Occupy Movement. He is the perfect performer to honor Pete Seeger!,” said Robert Neustadt, an NAU faculty member organizing the event.

COST: Free and open to the public.  Tickets will be available through NAU Central Ticketing at the Box Office, at and the door (if not sold out) on a first come first serve basis.