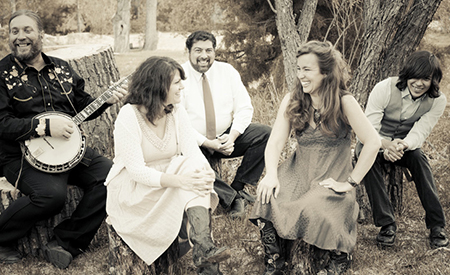 Jeff Scroggins & Colorado is a high energy, high mountain “bluegrass explosion,” that features the amazing banjo playing of Jeff Scroggins. Jeff’s fiery style and lightning fast licks have earned him many fans worldwide, and have left many a first time listener in stunned disbelief! It also features the award winning mandolin playing of Jeff’s son Tristan Scroggins. Tristan is also an accomplished songwriter, and his and Jeff’s original instrumentals play a large role in the band’s unique and energetic sound.

The band also features incredible bluegrass vocals, led by the powerful voice of frontman Greg Blake. Greg has twice been nominated for SPBGMA’s “Traditional Male Vocalist of the Year” award, and his phenomenal bluegrass guitar playing has earned him 9 nominations and an amazing 5 consecutive wins as SPBGMA’s Guitarist of the Year!

Jeff is an internationally known performer and teacher. He toured Russia with the Andy Owens Project, and Japan with Andy and Steve Kaufman. Jeff has also taught at bluegrass music camps in the US and abroad; most recently at the Nimble Fingers Bluegrass & Old Time Music Workshop in Sorrento, British Columbia as well as many other great camps including the Steve Kaufman Acoustic “Kamp” in Maryville, TN. In July 2011, Jeff performed and taught at the Rainforest World Music Festival in Kuching, Sarawak, Malaysia on the island of Borneo.

Greg Blake was born in southern West Virginia and from there acquired his love for bluegrass and mountain music. Influenced by the Louvin Bros., Doc Watson, Bill Monroe, Flatt & Scruggs, Tony Rice, Doyle Lawson, J.D. Crowe, Greg began playing and singing at age seven. Greg was selected SPBGMA Bluegrass Guitar Performer of the Year five years in a row, and has been nominated for that honor a total of 9 times, as well as being nominated twice for Traditional Male Vocalist of the Year.

Tristan Scroggins is 18 years old and has been playing for 9 years – Half of his life. Tristan started out playing music when he was inspired by his father, Jeff Scroggins, “The Unsung Hero of the Banjo”, to learn how to play the banjo. However, Tristan’s interests turned to the mandolin after he realized that he might actually have potential with that instrument and he figured he might as well kill two birds with one stone and socially alienate himself a little less. After just a few months of practicing, Tristan won through some set of random inexplicable events, the first contest he entered. This fully turned Tristan’s attention to the mandolin. In the years following, Tristan began to put all his attention on his music.
jeffscrogginsandcolorado.com
Share This Story