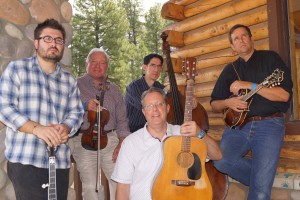 Join us for a FFOTM and Pickin’ in the Pines fundraiser with James Reams and the Barnstormers!

James Reams sounds “as smoky as his heroes: Lester, Carter, and Red.”

James Reams formed the Barnstormers in 1993. Coming from a family of traditional singers in southeastern Kentucky, James has played both old-time and bluegrass music since he was just a little sprout. James is known as an “ambassador of Bluegrass” for his dedication to and deep involvement in the thriving bluegrass and Americana music community. To date, he has released eight CDs including a special DVD documentary of the band. A single (Almost Hear the Blues) from his most recent CD, One Foot in the Honky Tonk, charted nationally and the CD made 2 Top Ten Lists of 2011. His original songs are important additions to the bluegrass repertoire, keeping this tradition alive with contemporary issues and new sounds. His guitar playing was highlighted in Flatpicking Guitar Magazine’s “Masters of Rhythm Guitar” column. James is also the organizer of the Park Slope Bluegrass Oldtime Music Jamboree, an annual music festival he started in 1998 that attracts musicians and fans of traditional music to its workshops, jamming and concerts — the only event of its kind in or around New York City.

James is pleased to feature Blaine Sprouse at selected venues on the west coast. Much in demand as a performer and session player, Blaine Sprouse performed on the Grand Ole Opry for over 15 years. Blaine has toured nationally and internationally and recorded with a stunning array of legendary bluegrass and country artists, among them, Bill Monroe and the Bluegrass Boys, Jim and Jesse and the Virginia Boys, Charlie Louvin, Alabama, Randy Travis, Glen Campbell, and the Osborne Brothers. His solo recordings are available on the Rounder and Cumberland Record labels.

In 2013 the band will be promoting its’ 20-year anniversary with a Coast-to-Coast Celebration featuring special guest performances and reunions with previous band members. To coincide with the Celebration, James is releasing another documentary, Making History with Pioneers of Bluegrass, in which he interviews first generation bluegrass musicians about the early days, capturing and preserving this tasty slice of America’s musical pie for the future.