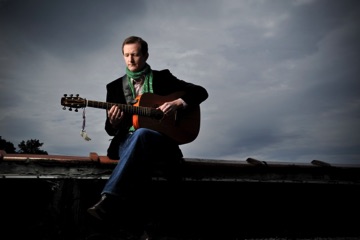 Impossibly in demand in the studio and on the road, immensely talented and blessed with an acute ear, a wicked sense of rhythm and seemingly endless stream of magic in his playing, composing, performing and producing, John Doyle is solidly establishing himself as one of the most versatile, creative and prolific voices in folk and traditional Irish music.
In 1994 John Doyle brought his brilliant and innovative guitar stylings to the nascent Irish super-group Solas, which soon took the folk and Celtic music worlds by storm. In the years since going out on his own, John has recorded two solo albums, including Wayward Son, which The Irish Edition hailed as “a contender for Album of the Year;” and has become a highly sought-after accompanist and session player for the likes of Joan Baez, Eileen Ivers, Tim O’Brien, Linda Thompson, Seamus Egan, Alison Brown and Kate Rusby; and has developed compelling duo performances, first with fiddler Liz Carroll and more recently with Solas’ co-founding vocalist Karan Casey. Their new CD is Exiles Return.
From a musical family in Dublin, John was sixteen when he went on the road with Chanting House, a group which he formed with Susan McKeown and which eventually included such great players as Seamus Egan, Eileen Ivers, Donogh Hennessy, and Brian Doyle. The highly influential Solas followed, its success due in no small part to John’s powerful rhythmic guitar. As a member of Solas, John performed internationally to sold out audiences and appeared on many television and radio programs, including NBC’s The Today Show, A Prairie Home Companion, Mountain Stage, E-Town and World Cafe. As part of that critically acclaimed group, he also received three NAIRD awards and a Grammy nomination.
He visits Flagstaff in our new Steel String Guitar Series at Firecreek Coffee Company along with Duncan Wickel on fiddle.