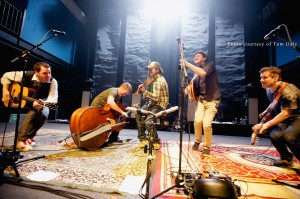 The Infamous Stringdusters consist of Andy Falco (guitar), Travis Book (bass), Jeremy Garrett (fiddle), Andy Hall (dobro), and Chris Pandolfi (banjo). They sound like no one else, combining virtuosic chops on five traditional bluegrass instruments, with an ethos of pushing the genre forward. The Stringdusters’ live shows take improvised string band music to new places, combining musicianship and songwriting with experimental performance and a contagious energy flowing between the band and crowd. Their groundbreaking musical proficiency is earning them critical acclaim, awards, and nominations aplenty; and has even attracted the attention of musical legends Phil Lesh and John Scofield, who have joined The ‘Dusters on stage to offer up unforgettable, raucously crowd-pleasing sit-ins.

“The Infamous Stringdusters don’t leave bluegrass behind; they’re stretching it from within.”
~ Jon Pareles, The New York Times

$1 from every ticket will be donated to the Conservation Alliance.