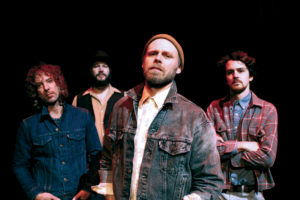 Horse Feathers feels like a secret you don’t really want to share. Over twelve years and five albums, a passionate fan base has experienced this band as a precious commodity that they want to keep close to their hearts. One reason for this can be found in lead singer Justin Ringle’s distinctive voice, at once vulnerable and piercing, and in the quality of the music: gorgeous, lush string arrangements surrounding stark, visceral lyrics whose bite makes a piquant juxtaposition to the surrounding beauty.

Now, however, Horse Feathers has created an album that differs enough from its predecessors to suggest that the cat might get out of the bag. On Appreciation, their sixth full-length and the fifth on venerable independent label Kill Rock Stars, the signifiers of the band are there: Ringle’s warm tenor and lyrics that speak of work, love, and other struggles. But on this album less of the song dynamics are achieved with strings and more with an exciting new rhythm section steeped in Northern Soul. Longtime violinist Nathan Crockett and keyboardist Dustin Dybvig provide continuity, but much of Appreciation feels like the best of Ringle’s previous musical ideas just took a giant step into a larger arena.

Recorded primarily in Kentucky (at La-La Land Studios in Louisville and Shangri-La Studios in Lexington), the new album features instrumentalists J. Tom Hnatow, Robby Cosenza and R&B vocalist Joslyn Hampton, who helped make Appreciation a mixture of strutting ‘70s-style country-pop (“Without Applause,” “Don’t Mean To Pry”) and supple soul (“Best To Leave,” “Evictions”). But Horse Feathers hasn’t gained accessibility at the expense of quality, nor at the expense of their signature instrumentation (“The Hex” might be the only R&B/soul song where the rhythmic lead is played on banjo). For those who crave what NPR called “the densely pretty seethe of Horse Feathers’ earlier ballads”, the album delivers “Born in Love” and “On the Rise”, accentuating the string surge with Hammond organ, piano, tambourine, and finger snaps.

“It just felt like a fresh take on how my songs can come across,” Ringle says. “With this incarnation, it’s okay if what I’m doing right now is in fact kind of a pop song. I can have a chorus and repeat something. I’m more aware of that and enjoy it.”

This artistic adjustment comes in the wake of a lot of changes in Ringle’s life. Not too long ago, he left his former hometown of Portland for the coastal city Astoria, Oregon. He’s also been dipping his toes into the world of record production, helping North Carolina band River Whyless with the recording of their last album We All The Light. After a while of bouncing between three states, as well as stops in Camas, Washington to finish Appreciation with longtime compatriot Skyler Norwood at Miracle Lake Studios, Ringle is finally settling down just in time to get ready to hit the road with Horse Feathers in support of this new album. “I wanna get out there and do my job,” he says.

Diehard fans are going to find plenty to cherish on Appreciation. But they’re going to have to make room in the club house for a lot more people – with this album, the Horse Feathers secret is officially out.