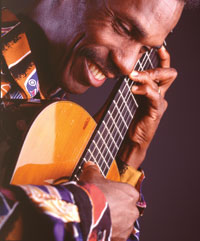 Virtuoso Brazilian guitarist, percussionist, multi-instrumentalist and composer, Celso Machado transports his audiences through the richness and diversity of Brazilian music and beyond. For forty years Celso Machado has been performing on concert stages throughout Brazil, Western Europe, Scandinavia, Canada, and the United States. Considered one of the most versatile and exciting musician/composers of Brazilian music today; his guitar technique is but one of his passions; his gift for making music out of anything and everything around us is his mission in life.

In addition to Celso’s solo career he has shared the stages with some of the world’s great guitarists: Sergio and Odair Assad, Badi Assad, Romero Lubambo, Yamandu Costa, Cristina Azuma, Peter Finger, and Solorazaf.  He has opened for Gilberto Gil, Bebel Gilberto, Hermeto Pascaul, and  Al di Meola; amongst other great musicians.

Brazilian music has arisen out of various blends of Classical European, African, Portuguese and Indigenous influences. There is less division in Brazilian music between classical and jazz, jazz and folk.  While Celso’s music is rooted in Brazilian rhythmic and melodic styles, it also reflects his incurable fascination with other world music traditions. He finds similarities between the music of southern Italy and northeast Brazil, the Egyptian Maqsoum and the Brazilian Baião  rhythm, the Moroccan Gnawa rhythm  and Afoxé and Samba. Celso incorporates these influences into his own sound; his own unique contribution to the ongoing evolution of Brazilian music.

Drawing on his thorough study of classical guitar, Celso composes for guitar and ensemble.  His remarkably innovative compositions are infused with a rich knowledge of the traditional music of Brazil: samba, chôro, baião, frêvo etc.  His compositions are published by Editions Henry Lemoine in Paris and are performed and recorded by both students and professionals around the World, from solo performances to guitar orchestras.  Many of his scores have been adapted for other instruments: piano, violin, cello, clarinet, pan pipes, harp etc.