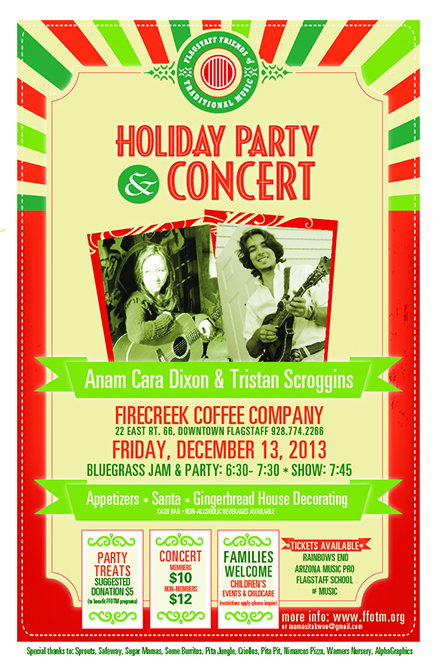 [dropcap]J[/dropcap]oin us from 6:30-7:30 pm for a bluegrass jam and celebration followed by the concert at 7:45 pm. We’ll have delicious appetizers courtesy of many of our community restaurant friends and a cash bar. (If you are feeling generous, please offer a suggested donation of $5 towards the food—concert tickets are separate – members $10, non-members $12, students and military $8.) Santa will be there with his merry helpers and we will have childcare during the show with gingerbread decorating for the kiddos. Firecreek is downtown at 22 E. Rt. 66. Call Kwon for information: 928.863.1108

Tristan Scroggins was born into bluegrass. He is the son of infamous national banjo champion, Jeff Scroggins. When Tristan was born, he had already been listening to driving rhythms and lonesome harmonies for nine months. At age nine, when Tristan picked up a mandolin for the first time, he began to exhibit promise, he won his first open competition 6 months later. By the time he was sixteen, Scroggins was the two-time state mandolin champion in both New Mexico and Arizona. Nearing nineteen and having been playing for more than half his life, Tristan Scroggins is now an accomplished songwriter and performer with his father’s Colorado based super-group “Jeff Scroggins & Colorado.
Anam Cara Dixon, is a 15 year old Flagstaff-based singer-songwriter, guitarist, and harpist. She is lead singer and guitarist of her local Flagstaff bands, The Anam Cara Trio and Anam Cara and the Boys.  Anam regularly performs bluegrass, roots and other styles of music both solo and with her bands in downtown Flagstaff as well as in surrounding areas.The band was born out of fundraising efforts to get herself to Rockygrass Academy in 2011 to study with Uwe Kruger of the Kruger Brothers, with whom she continues to study.Last November, Anam co-produced with local musician Brad Bays, her first five-track EP album of all original music and lyrics. Anam is ready to make another album, will attend a top music school in a few years and intends to be a traveling musician in the bluegrass and acoustic music circuits.Tristan Scroggins and Anam Cara are collaborating  for the first time on a very special series of shows.  Both musicians are seasoned songwriters and we can expect to hear new originals and well chosen bluegrass covers.  These young musicians are a powerhouse duo delivering electrifying combos of vocals, guitar, and mandolin!
Share This Story