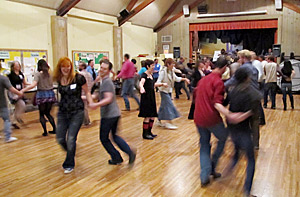 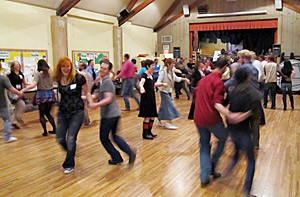 Country Dance and Song Society Centennial Tour – Prescott Portion of the Arizona Tour, April 27 and 28, is All Free. This is Big!

The Country Dance and Song Society (CDSS) is celebrating its 100th birthday by touring seven states, with Arizona privileged to be selected. The tour will be in Tucson Saturday, April 25 and Wednesday through Friday, April 29 though May 1, in Phoenix Sunday, April 26, and in Prescott Monday and Tuesday, April 27 and 28. Our friends in the Valley, Phoenix Music and Traditional Dance, have established an excellent, informative website www.phxtmd.org/cdss-tour.html. Country Dance and Song Society also has a website, www.cdss100.org

Access these websites for further information. In total, statewide, there will be six dances and nineteen workshops!

Leading all this will be Carol Ormand, renowned contra dance and square dance caller and dance author and the nationally known band Maivish; Jaige Trudel, fiddler and music author; Adam Broome, guitarist, tune-smith, and songwriter; and Matthew Olwell, perscussionist, flutist, and internationally known step dancer, including clogging. To see a ten minute video of Maivish playing for a contra dance with caller Adina Gordan, goggle contra dancing Maivish and then click on Anina Gordan and “Maivish” at Glen Echo, MD.
Prescott was selected for the tour not only for having an active contra dance community but also due to our young persons’ band, the Chupacabras, which plays four times a year for Prescott contra dances plus for other dances and events.

All Prescott activities at Prescott Parks and Rec, 824 E. Gurley, the Old Armory.

The dance, contra with a little bit of square and English Country, will be from 7 to 10 PM on Monday, April 27.The Chupacabras will accompany Ms. Ormand and Maivish. During the intermission, after the waltz, there will be a step dance
demonstration by Matt Olwell.

All Activities Are Free!