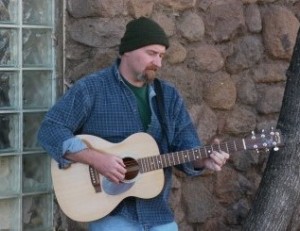 Chuck Cheesman is back for a visit to Flagstaff.  Chuck is a singer/songwriter and finger style guitarist. Formerly an instructor at Chicago’s Old Town School of Folk Music, he made his home here in Flagstaff for over a dozen years, and he has played a variety of venues in the northern Arizona area. Chuck is also one of the founders of the Flagstaff Song Circle.

Chuck writes contemporary folk/pop songs and also works as a children’s music educator. Nature and wild places serve as inspiration for much of his writing – one example being the song “Wolves of Lamar Valley” which documents the restoration of wolves to Yellowstone.

He has recorded several CDs of his original songs, including recordings of children’s music. His recording, Campfire, received significant airplay on public radio folk shows across the country.

Chuck is currently residing in the Portland, Oregon area, and so is not around these parts very often. So, join us at FFP for an enjoyable evening of music and song with Chuck.