The Celtic Fiddle Festival In Concert 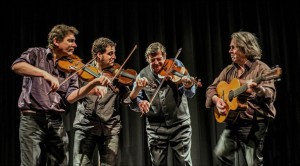 Sold-out tours and standing ovations give testimony to the electricity and excitement generated by the group. Along with acclaimed guitarist Nicolas Quemener from Brittany, the quartet combines their talents,musical traditions, and spontaneous humor for an evening of dazzling energy and subtle grace. These traditional masters showcase their regional repertoires and together conjure an experience of breathtaking performances.

Kevin Burke is a world-renowned Irish fiddler whose formidable career includes the seminal Irish groups The Bothy Band and Patrick Street. Playing the fluid, highly ornamented style of County Sligo, Kevin is a recipient of the NEA’s National Heritage Award. Christian Lemaître honed his remarkable skills playing the hypnotic Breton melodies at festou-noz (night dances) throughout Brittany, the Celtic region of France. He is a founding member of the group Kornog. André Brunet, the newest member, is a wonderful young French-Canadian fiddler playing the infectiously rhythmic tunes of Quebec. He is a member of the group Les Temps Antan, and was featured in the opening ceremonies of the 2010 Winter Olympics in Vancouver. Nicolas Quemener is a master open-tuning guitarist, who grew up in Angers, France and studied percussion in the National School of Music. He has been a part of many superb Celtic bands, including Arcady, and Kornog, and continues to play and record with a number of acclaimed Breton and Irish artists.

Living Traditions Presentations is supported in part by the Arizona Commission on the Arts, which receives support from the State of Arizona and the National Endowment for the Arts and is also supported by the BBB Revenues from the City of Flagstaff and Flagstaff Cultural Partners.

Celtic Fiddle Festival will be conducting workshops on April 15 from 5:30-7:30pm at the NAU School of Music. Cost is $40 to attend. Workshops will  be taught on fiddle and guitar, but other instruments used in Irish, Quebecois, and Breton music are welcome to attend and learn! These workshops are sponsored by the NAU School of Music. Please contact Kari for more information. 928-600-1365 or Kari@LivingTraditionsPresentations.com