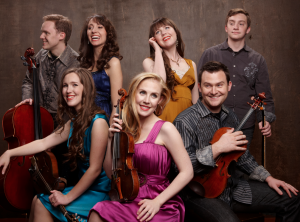 The fiddles will be fired up and the voices will be soaring at NAU’s Ardrey Memorial Auditorium when they bring the Annie Moses Band to the stage. The Annie Moses Band is a musical family made up of six siblings and their parents, Bill and Robin. The group blends fiddle, jazz, Celtic and classical influences and combines them with folk-inspired vocals to create a sound that is fresh and familiar, like out-of-the-dryer flannel pajamas. Most of the band members have graduated from the prestigious Juilliard School of Music (so, they got the chops) and as a whole the family has earned numerous awards and achievements that testify to the depth of each member’s artistic ability. In addition to its popular PBS specials and tour dates, the Annie Moses Band hosts a Fine Arts Summer Academy where young musicians can work on their technique and on-stage performing experience. Tickets are $20 to $25. Concert starts at 7:30 p.m. at Ardrey Memorial Auditorium, 1115 S. Knoles Drive, on the NAU Campus. 523-5661. www.nau.edu/cto.

The Annie Moses Band is an award-winning group of Juilliard-trained musicians and songwriters dedicated to musical and spiritual excellence in the arts. With roots in both classical, jazz, and Christian music, the group has recorded six albums and performs more than a hundred concerts annually. They have been featured on the cover of Strings magazine, the premiere publication for the neo-classical genre, and their latest albums received critical acclaim from such publications as CCM Magazine, The Tennessean, The Dallas Morning News, Christianity Today, and Music Row Magazine.

The Annie Moses Band is a family. Annie Wolaver, the lead violinist and vocalist, has graced the stages of symphony orchestras across the United States, while her brother Alex, the group’s violist, has performed on “Good Morning America” with Charlotte Church and was handpicked to participate in a quartet personally coached by Itzhak Perlman. Joining these talents are Benjamin, the group’s cellist, Camille, the band’s harpist and keyboard player, Gretchen, on the mandolin and violin, and cameo appearances by Jeremiah, who plays the banjo and guitar.

From the Grand Ole Opry to Carnegie Hall, the Annie Moses Band has wowed audiences with their unique virtuosic brand of baroque pop and is universally acclaimed by critics and audiences alike for their electrifying instrumental virtuosity and shimmering layered vocals.

“The Annie Moses Band is constantly pushing the boundaries of its art form, while drawing on a staggering array of musical styles and influences.”—Missing Piece