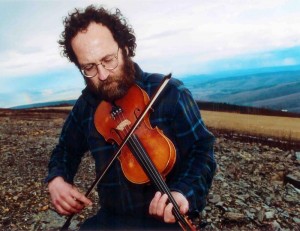 Waldman and Burke will be picking right up where they left off two and a half years ago, Waldman’s most recent Arizona appearance, when they played six shows at the Musical Instrument Museum in Phoenix.

Waldman combines old-time Appalachian-style fiddling, original poetry, and mostly Alaska-set storytelling for a performance uniquely his.  He has six full-length poetry collections, a memoir, a children’s book, and nine CDs that combine old-time Appalachian string-band music with original poetry and Alaska-set storytelling.  The Cottonwood appearance comes in the midst of a busy month for Waldman, which includes events in Santa Fe, Gilbert, Bisbee, Los Angeles, and Seattle.

Bill Burke has been making musical instruments and playing traditional music for 40 years, the last 35 in Flagstaff.  As an instrument maker, he builds guitars, banjos and several types of mandolins.  His instruments are generally based on established designs and he adapts design, size, and choice of wood to meet clients’ specific needs.  As a musician, Burke often plays at festivals and coffee houses. In addition, he teaches banjo and guitar.

Waldman’s show will appeal to anyone who enjoys traditional folk music, smart poetry, acclaimed storytelling, or Alaska.  Begin the evening in Cottonwood, then journey to Kodiak, Alaska and back.